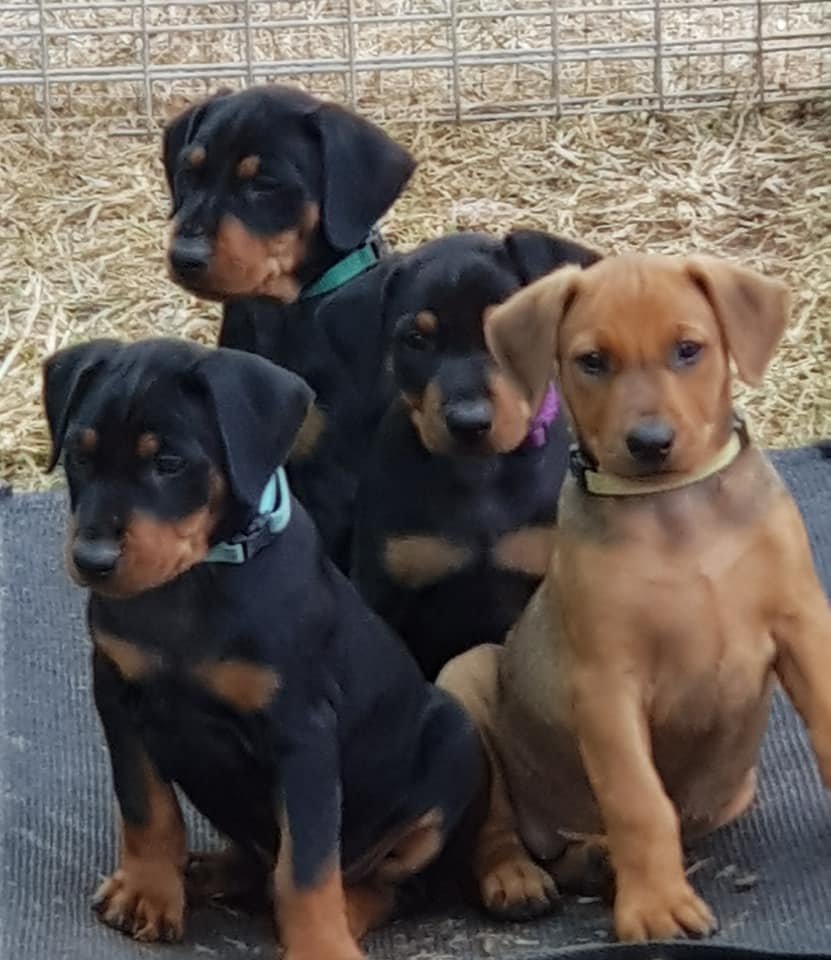 GP Health
Over the past few years it has been found that the German Pinscher is afflicted by few genetic health problems that are not already common amongst most breeds of dogs, therefore genetically the breed is very sound. Most will be relevant to the breeder and only one or two health issues will affect the pet owner long term.

The most common ones of any priority in my opinion are...

1 Eyes
such as Juvenile cataracts and Retinol folds- the most common problem within the GP today, and is increasing. Breeders are testing their breeding stock and not breeding with those that are affected including those that were affected as pups (Retinol folds) and since cleared would be ideal but the gene pool is very small. The dog will still be a carrier of the problem so this needs to be remembered for the future when/if using those dogs. A dog that cannot see clearly [cataracts] can exhibit a false temperament problem. This has the potential to affect the pet owner.

2. Hip/ Elbow Dysplasia
has reared its ugly head on occasion but is not prolific if kept in line and is tested for in the GP by those interested in conserving the breeds health. This generally shows clinical signs as the dog gets older and causes severe pain in getting up from the prone position and jumping up or climbing stairs etc. Will affect the pet owner later in life.

3. Skin
problems- There are some carriers of the Demodex [red mange], (lack of the T-Gen) and the dogs loose their coat has been found to be an increasing problem in most parts of the world, these things you can not see as a breeder until you have already sold the puppies and they show clinical signs later on. Breeding with the carriers without clinical signs still maintains it within the breed to rear its head later. Skin allergies are also on the rise and related usually to diet. This is the one that will affect the pet owner when the dog is young.

4. Vaccinations
- Some GP's can have an allergic reaction to post Distemper vaccination and is treated with cortisone tablets. It is an allergy reaction, not neurological, symptoms are balance problems, vomiting and cramps looking like seizures are the most common. After treatment it does not affect the dog and never returns to our knowledge. I have only had one pup to do this but it is known of in other parts of the world commonly. The quality of our vaccinations is much more scrutinized than some countries, in my opinion perhaps this is the reason we don't see it so often. If the pet owner is aware of this it helps in quick diagnosis for the vet. The first to see the signs is usually the breeder this is usually when the pup has its first vaccinations at 6-8 weeks. There has been occasion it has appeared at the 12 week vaccination. This can affect the pet owner.

5.  Heart murmurs
- known, although uncommon in Australia. These murmurs, if slight can and have disappeared as the dog grew up, although not suggested as fit for breeding, it is found in the cousin to the GP, the Schnauzer also. Rarely will affect the pet owner.

6. Thyroid
- Not known in Australia so far-therefore not tested for. After all we don't need to test for things that have not risen here in the GP for the simple excitement of testing do we without clinical signs appearing first? Should the occasion arise I am sure the breeders will test for it.

7. Von Willebrand's (vWD)
Disease-is following closely behind vaccination problems and seems to be the new focus lately although found in over 65 breeds of dog to date and discovered in Australia in about the late 1980's early 1990's in the Dobermann and investigated extensively by those breeders around at the time and both are shown as type 1, the milder form. Rarely has there been a death (there has been some recorded in Dobermann litters but not GP's to date) from this misnamed disorder passed by a hereditary defected gene -it is in essence a blood clotting (platelet) problem. It is NOT Hemophilia. Suggested matings are Clear to Clear. Clear to Carrier and Carrier to carrier (preferably not done) and again to clear dogs are suitable for breeding. The affected dog is not suitable for breeding.  The potential for a problem had to be there [common sense that if the Dobermann has it the GP would most likely too and both found to have the same type 1 according to Gen-Vet-Australia, as was suspected-http://members.ozemail.com.au/~gentest/
This needs to be watched closely using breeding practices that better the outcomes without reducing the gene pool too far. It is theoretically easy to fix from a breeding point of view. We also need to remember the gene pool is very small in GP's and the last thing we need to do is extensively inbreed to eradicate a minor disorder and possible introduce a worse one in doing so using suspect outcrossing of bloodlines. It will rarely affect the pet owner.

8. Colour Dilute
-This breed is also tested in Europe for the Colour Dilute gene - only really affects breeders not wishing to produce the dreaded blue GP. The fawn has occasionally shown clinical signs of Alopecia or blue related problems, but is not considered as such a problem as the genetically blue dogs. The gene to date cannot be related directly to those problems, but is associated to it. Will only affect the pet owner of some Blue/ Fawn dogs.
Masterkarn knls tests for Hips/Elbows and Eyes and readily available DNA testing in Australia.

There are volumes of information on the net should you wish to know more. Since its inception in 1984 Masterkarn kennels, has promoted health testing for breeding stock and has a health guarantee on their puppies as part of your contract.