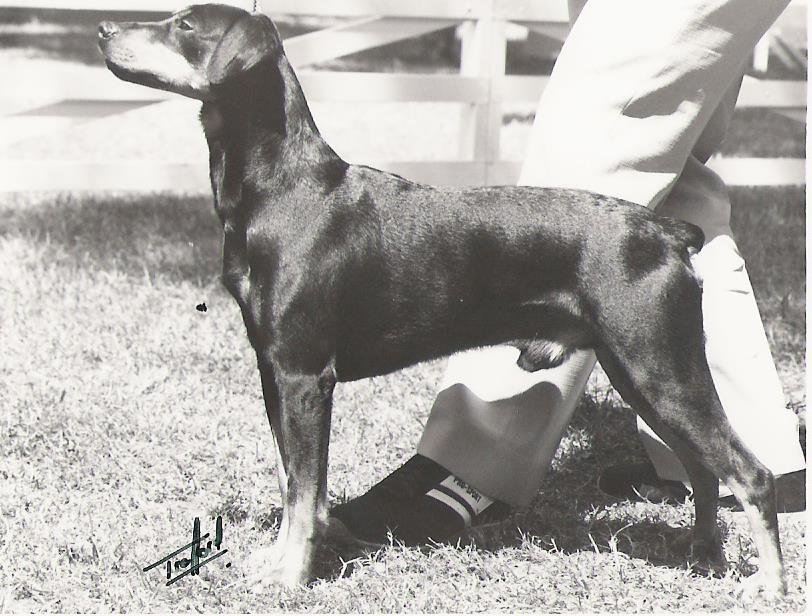 History of Masterkarn German Pinschers
from 1989- 2012

German Pinschers, as a breed, originated about 400 years ago. They were bred as ratters and to guard stables.
The German Pinscher looks like a small Doberman but is in fact a more ancient breed. They originated in Standard Schnauzer breeding several hundred years ago. In these litters there were both smooth-coated and wire-coated puppies. The smooth were bred to the smooth (resulting in German Pinschers) and the wire were bred to the wire (resulting in Standard Schnauzers). The German Pinschers were recognised in 1879 in Germany and the Pinscher Schnauzer Klub was founded in 1895 in Germany. The Pinscher is the German equivalent of the terrier (Pinscher actually means terrier in German).
As mentioned above, they were originally bred to kill vermin in the barns, therefore they are very quick and oriented to sight and motion. The rural people prized the dogs for their hunting abilities. They were also taken to market to guard the wagons and were selectively bred for their guarding instinct.
They are good natured, playful and good with children. They are a very alert and loyal companion and they make good guard dogs. The German Pinscher is still considered a rare breed today.

Mike and Helen Towell (Deutschpin Kennels in Qld) in conjunction with Paul and Sue Hopper imported the first German Pinschers to Australia in 1986. These two GP’s were Australian Champion Puck V Cronsbach & Marie V Cronsbach. Both were from Cronsbach Kennels in Germany, who still breed GP’s today. The first litter of German Pinschers in Australia was born in 1988 but did not survive. In 1989 the second and successful litter was born, it resulted in 3 dogs and 4 bitches, like their parents, all black and tans. Three of these animals became the foundation for a successful first 12 years of breeding.
Marie and Puck were only bred once, but from this union came two father/ daughter matings (Puck and Ch Deutschpin Black Lace) before any more GP’s were imported into Australia. These litters were bred by Anita & John Fryer who ran Masterkarn Kennels. They kept the interest in this extremely rare breed by frequent exhibitions in the show and obedience rings of their all black and tan animals. At a later date this kennel also took over the ownership of both Puck and Marie both from German lines.

They were the only active exhibitor and breeder of German Pinschers at this time.

Several litters from these dogs were bred and mated to two dogs Anita and John purchased from Miesterpin kennels-Ch Miesterpin Gustav and Monique who introduced the French lines to Masterkarn. These dogs became the foundation of the Masterkarn kennel prefix of German Pinschers.

In 1997 Anita & John Fryer (Masterkarn Kennels) together with Wilma Williamson - Elstenberg Kennels, WA (who started with Masterkarn dogs) imported a young red male from the UK, Lankirk Seriously Sloshed (Bundy). He has sired 2 litters. His first was to Ch. Meisterpin Sonata of Kaitler Kennels resulting in a stag red bitch. His second litter was to a bitch called Elstenburg Racy Atlanta, in 1999. This resulted in the birth of 8 pups, all red in colour.

The UK imported dog was imported specifically to go to the two bitches Ch. Masterkarn Fire Cracker and Masterkarn Wind Dancer planned for the year 2000 but through bad luck did not get the chance to happen.
The fact the import from the UK- Lankirk Seriously Sloshed (Bundy) had been desexed by the dogs family care home, without permission of the owners (Masterkarn and Elstenberg kennels).
Anita and John Fryer retired from breeding for a time around 1999 deciding there was little worth breeding with regarding the temperament they desired.
This unfortunate series of events set back Masterkarn breeding program for many years.

Having a pre-mature retirement from breeding until they could find what they were looking for with their last litter in 1997 they remained active in the public arena with the breed through obedience and via occasional email with other breeders.
The kennel did not feel that their breeding would be justified by using the UK import from Kinrah kennels available at the time and waited until they could either bring in a new dog themselves or find a dog to use here that would suit the breeding program they had in mind.
It took 9 years for John and Anita to decide to breed again, their last bitch Ch Deustchpin Black lace had passed away. So when the opportunity arose Anita and John obtained Elstenberg Rhienmaiden ( a Lankirk seriously sloshed daughter) from his last mating. She now 5.5 years old from Elstenberg kennels unfortunately the two mating’s of hers resulted in nil puppies born (male problem) and Toffee now being 7, Anita and John did not want to mate her due to her age. Not giving up they again purchased two more bitches (Firedragon Dragon Dreams and Firedragon Celestial Dream) they then commenced their breeding program with Firedragon Dragon Dreams first and later a daughter from Celestial Drm (now in NZ).

German Pinscher Exports to include later in their breeding plan...

Masterkarn I Am Dream Seeker (JAPAN)

Feeling the breed had some GP’s they would consider breeding with and up to health testing quality expected, the following successful litters are results from Masterkarn's re-commenced breeding program...

2010 ~ Ch Masterkarn Simply Thebest to Masterkarn My Ambition ~producing the I Am litter~ Masterkarn I Am Dream Mist and I Am Dream Seeker (exported to Japan).

If you would like to talk to us please email or phone for more information.
Please contact us-masterkarn.knls@gmail.com 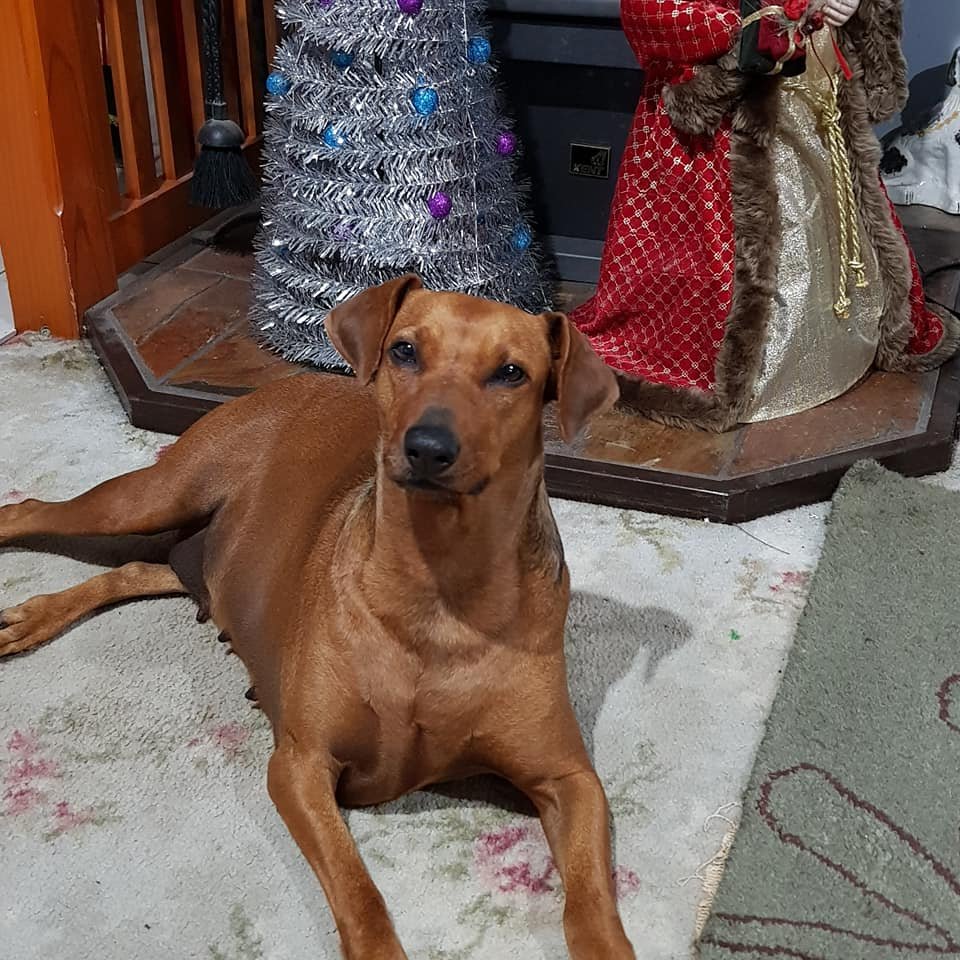