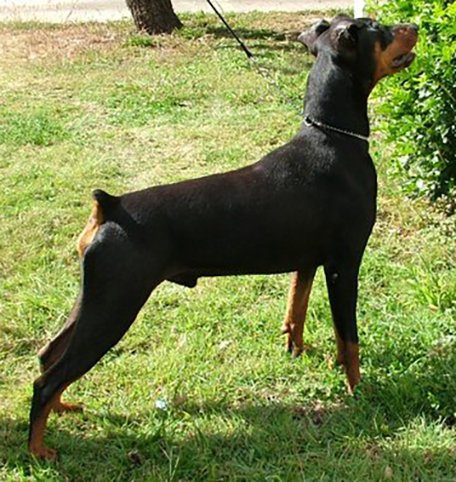 Description of the breed Standard fo the German PInscher. The breed standard is the guide which all German Pinscher breeders should know and understand to enable the correct type of German Pinscher to become the norm. It is what makes the German pinscher look like the German pInscher. any deviations from the standard allow the breed to change or become a weak version of the original dog.

A Breed Standard is the guideline which describes the ideal characteristics, temperament and appearance including the correct colour of a breed and ensures that the breed is fit for function. Absolute soundness is essential.

Breeders and judges should at all times be careful to avoid obvious conditions or exaggerations which would be detrimental in any way to the health, welfare or soundness of this breed. From time to time certain conditions or exaggerations may be considered to have the potential to affect dogs in some breeds adversely, and judges and breeders are requested to refer to the Breed Watch section of the Kennel Club website here http://www.thekennelclub.org.uk/services/public/breed/watch for details of any such current issues.

If a feature or quality is desirable it should only be present in the right measure. However if a dog possesses a feature, characteristic or colour described as undesirable or highly undesirable it is strongly recommended that it should not be rewarded in the show ring.

Seen from above and side resembles a blunt wedge. Strong but not heavy, elongated without pronounced occiput. Overall length in proportion to back (from withers to base of tail) is approximately 1:2. Top of muzzle parallel with extended line of unwrinkled flat forehead; slight but distinct stop. Cheek muscles strong but not prominent. Deep muzzle. Nose full and black; in reds, nose of corresponding shade. Lips tight and dark. Snipiness undesirable.

Elegant and strong. Neither short nor stout. Nape well arched. Skin of throat tight without dewlap.

Well laid shoulder with good but flat muscle. Forelegs straight viewed from all sides, parallel elbows are close to body.

Seen from behind parallel, with sufficient width. Upper thigh slanted and strongly muscled. Good length and bend of stifle, hocks turning neither in nor out.

Well arched, compact and cat-like with dark nails. Turning neither in nor out. Tough, hard pads.

Undocked: Set and carried high with an upward sweep. In overall balance with the rest of the dog.

Free, well balanced and vigorous with good reach in front and strong rotary driving action from rear. Front and hind legs should not be thrown outwards. Topline should remain strong and firm. Hackney movement undesirable. 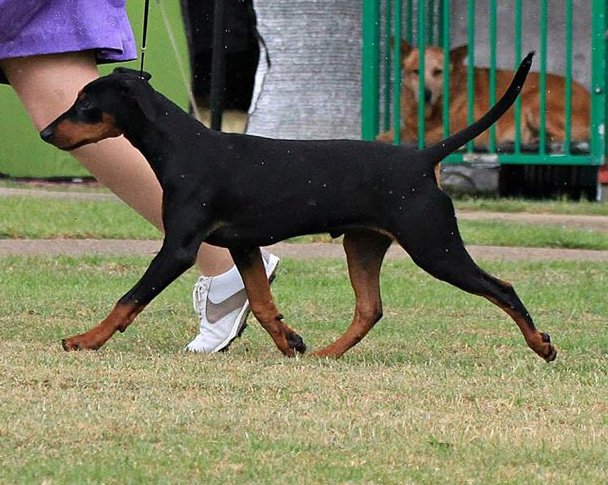 All solid colours from fawn (Isabella) to stag red in various shades. Black and blue with reddish/tan markings. In bi-coloured dogs sharply marked red/tan markings desirable. Markings distributed as follows: at cheeks, lips, lower jaw, above eyes, at throat, at forechest as two triangles separated from each other, at metatarsus, forelegs, feet, inner side of hindlegs and vent region.

Any departure from the foregoing points should be considered a fault and the seriousness with which the fault should be regarded should be in exact proportion to its degree and its effect upon the health and welfare of the dog and on the dog’s ability to perform its traditional work.

Male animals should have two apparently normal testicles fully descended into the scrotum.

Size – the Kennel Club Breed Standard is a guide and description of the ideal for the breed; the Size as described does not imply that a dog will match the measurements given (height or weight). A dog might be larger or smaller than the Size measurements stated in the Breed Standard. 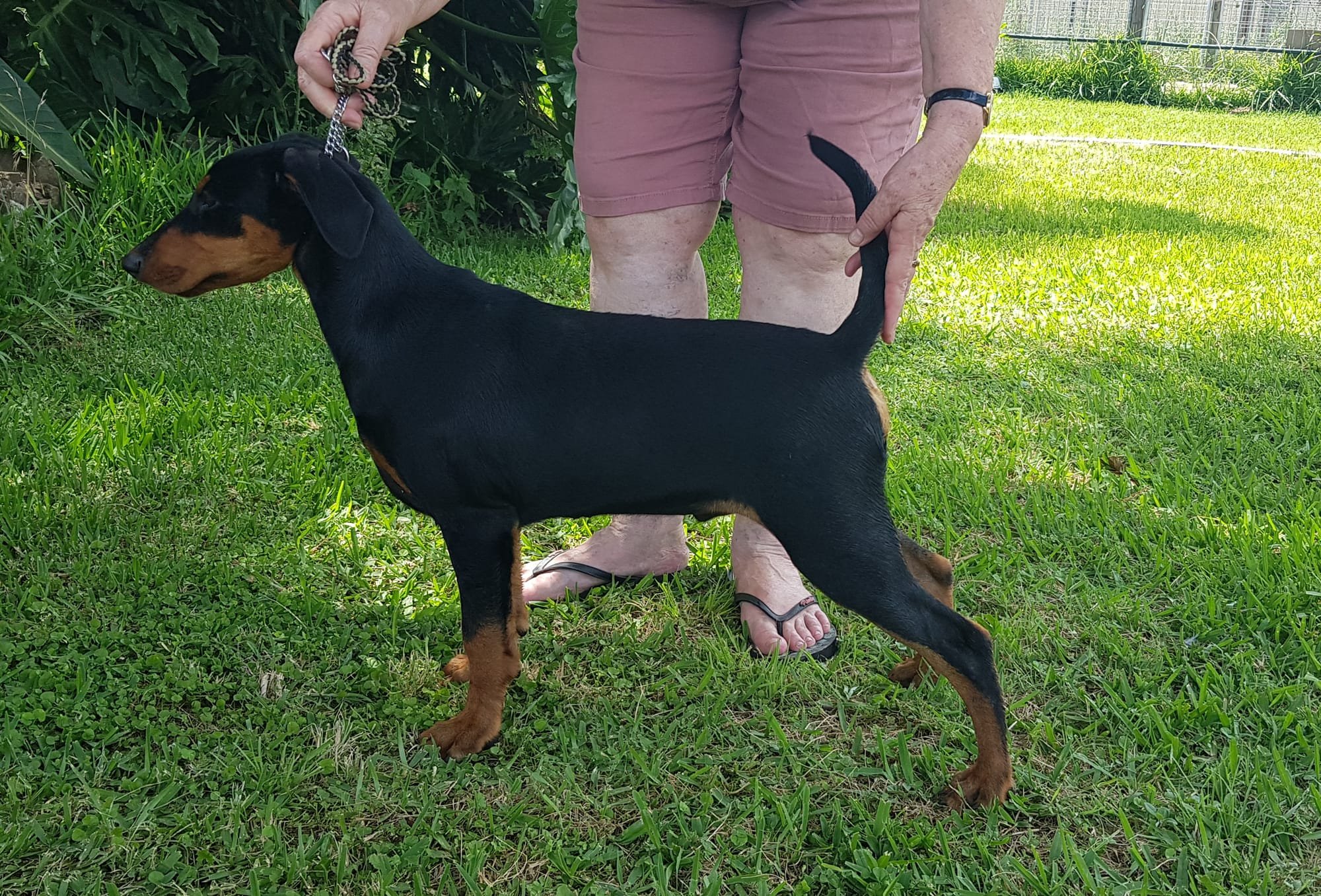 I like to keep this breed standard in mind particularly considering it has far more detail and is th eoriginal standard.

USE : Guard and companion dog

Swiss Cattle Dogs and other breeds

Without proof of work

The short-haired Pinscher is a very ancient breed, already mentioned in 1880 in the German Origins Book.

It has the same ancestors as the Schnauzer which in ancient times bore the name of wirehaired Pinscher. From the beginning, the short-haired Pinschers, mostly black with light brown spots, single-colored in shades from brown to red, pepper and salt, or simply gray-blue up to black, differed from those with coarse hair precisely for the short hair and the color of the coat.

The German Pinscher (also called German Pinscher or Medium Pinscher) is a short-haired dog, of medium size, inscribed in a square. He has a proud bearing, is strong like the Schnauzer, elegant, and has a harmonious silhouette. The well developed musculature is clearly visible, due to its short hair, especially in movement.

His lively, witty, self-confident, balanced nature, combined with intelligence and stamina, makes him a pleasant companion as both a companion and guard dog.

Region of the skull

Skull: Strong, elongated, without a markedly protruding occiput. There

forehead is flat and parallel to the nasal bridge.

Jaws / Teeth Powerful upper and lower jaws: the scissor bite is complete (with 42 teeth, according to the dog's dental formula), and strong; the teeth fit properly and are pure white. The masseters are strongly developed, without however giving an unpleasant relief to the cheeks.

Eyes dark, oval in shape; the edges of the eyelids are pigmented with black and are closely adherent to the eyeball

Ears folded and hanging, set high, V-shaped, pointing forward towards the temples, and their inner edges adhere closely to the cheeks; the parallel folds must not exceed the top of the skull.

Nobly arched, not too short, it fits smoothly into the withers; dry, without dewlap or slack skin; the skin of the throat is tightly adherent without forming any folds.

Topline slightly descending from the withers towards the rear

Withers is the highest point of the topline

Strong, short and taut back

Loins: Short, strong and high. The distance between the last rib and the hip is short, so that the dog is compact

Croup merges imperceptibly with the insertion of the tail in a slight curve.

Chest moderately broad, of oval section, reaching the elbow. The chest is distinctly marked by the tip of the sternum.

Lower line and belly The hips are not too raised: With the lower part of the ribcage, the lower line draws an elegant curve.

TAIL
Natural; the goal to be achieved is a saber or sickle tail

In general, seen from the front, the limbs are strong, straight and not close together; viewed from the side, the forearms are straight

Shoulders The scapula is very close to the thoracic cavity and is very muscular on both sides of the scapular spine, and protrudes from the spinous processes of the thoracic vertebrae. As oblique as possible and well turned towards the back, it forms an angle of about 50 ° to the horizontal.

Upper arm: Close to the body, strong and well muscled, forming an angle of 95 to 105 ° with the shoulder blade.

Elbow: Properly fitting, turning neither in nor out.

Forearm: Strongly developed and well muscled. Completely straight when viewed from the front and from the side.

Strong and round front foot. The toes are close together and arched (cat's foot); pads resistant, nails short, black and strong.

Knees turning neither in nor out.

Leg long and strong, with good tendons, fitting into a solid hock

Hock markedly angled, strong, firm, neither turned in nor out

Metatarsus perpendicular to the ground

Rear foot a little longer than the front. Fingers well together and arched. Short black nails

The Pinscher is a trotter. His back remains firm and quite firm in the movement, which is harmonious, confident, powerful and loose with good reach. Typical of the trot is the elastic, flowing movement that covers a lot of ground, with strong thrust of the hindquarters and free extension of the forequarters.

The markings are distributed as follows: above the eyes, in the throat, in the metacarpals, on the feet, inside the hind limbs, under the root of the tail, and in the form of two regular triangles, clearly separated, on the chest.

Height at the withers Males and Females: from 45 to 50 cm

Any deviation from the above must be considered as a defect that will be penalized according to its severity and in particular:

Any dog that clearly presents physical or behavioral anomalies will be disqualified.

For more details go to the Schnauzer and Pinscher Club website .