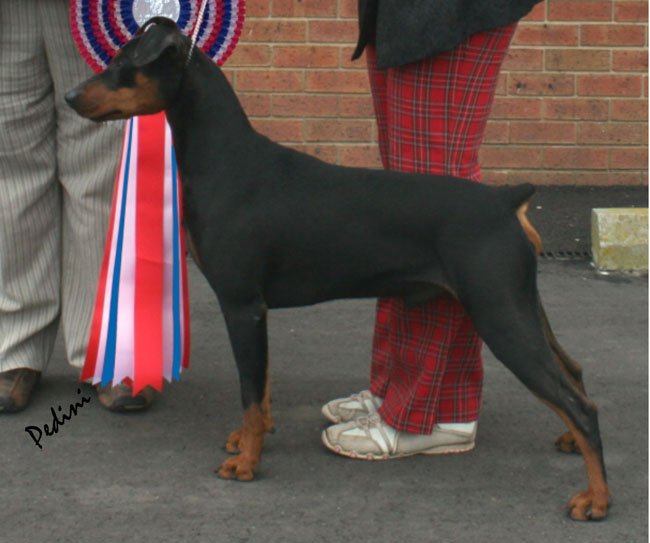 Atlas has a Correct Scissors Bite with Complete Dentition.

Atlas hit the ring in Queensland in 2007. Atlas titled before 12 months old and has been seriously considered for Group and class in group wins on many occasions. BOBS R/Up OISS at the 2008 inaugral United Pinscher show of Victoria is one of his many notable wins during his career.
His show career is limited, but certainly well done and he is often described as stunning.
He is one of the most important sires in our kennel lines and gave us what we hoped he would for our girls. Siring many Champions and now his great grand kids are titling too.
Now 7 years old his show ring career is sparse now only entered in limited specialty shows.

Atlas joined us at Masterkarn from Melka kennels in NZ in 2007 and hit the ground running winning classes in groups from Minor puppy.

The one word that describes Atlas is the word "presence". When you meet him he exudes it. He is an affectionate, powerful, dominate young man that loves nothing more that to be a couch potato with his family.
Atlas is a strong well built young male out of Rattenjager Hades imported from Norway by A. Tansey of Melka kennels and his Dam is the lovely NZ CH Magical Karisma of Melka Magic.
Atlas has all the attributes of a stunning almost perfect example of the breed. He is a solid but elegant male with great ring presence. A nicely curved neck flowing perfectly onto a very lovely top line, deep chested, nice fore-chest and fantastic head. His movement is balanced and sound. His personality is very loving and affectionate. Atlas loves to be inside with me while I watch a movie on the couch or going for a ride or walk.