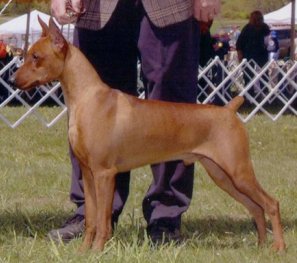 "Willie" - Am. AKC/UKC Ch. Dabney's Sweet William, CGC semen arrived at Masterkarn 2009. He is the first German Pinscher to win a Group 1 in the US since the early 90's and only the second to do so ever. (His is also the first Owner/Handled GP to do so. He is a strong, elegant and well bodied GP. His working abilities are true to GP type.

He was evaluated by a leading Doberman breeder, judge and Schutzhund trainer (Ray Carlisle), and commented on how true of a GP temperament Willie has. Nothing phased him and he has his protective tendencies. The people that really know Willie tell me he is a strong temperament with no fear, protective, yet happy to have people into his home- that he inspects and then goes on happily with his usual routine- but only after he jumps on them and acts like a total clown. He senses those around him and their true character.

For National breed points, he was third 2008. He was ranked #1 Breed in 2007, #2 All Breed behind his brother, Toby. Last year, he was #3 Breed and #6 All Breed, with limited showing while he trained for the agility ring. Willie is an Award of Merit winner at Westminster 2008 and the 2008 GPCA National, has been a consistent BOB winner and the only German Pinscher to win a GROUP 1 for twenty years. There's not a lot more I can say about Willie- his pictures and accomplishments say it all!

I thank Anita and Allen Dengler-co owners with his breeders Linda & John Krukar of
Dabney kennels (Dobermanns & German Pinschers) for the arrival of his semen in AUSTRALIA.

His Sire and Dam are fully imported from Finland out of Clefells kennels and bred by Dabney kennels (USA), we expect he will make his
mark through his progeny for our kennels and Australia.

2006
Willie completed his AKC Championship in exactly one month. His first show
at 9 months and finished at 10 months. He finished the year as # 2 German
Pinscher (all systems), beaten only by his father Jagger.

2007
Willie had 54 BOB's and 3 group fourths; he finished the year and #1 German
Pinscher (breed standings) and #2 German Pinscher All Breeds.

2008
He was an award of merit winner at Westminster. His United Kennels Club
Championship finished with group 3 and two group 2's and two group 1's.
Willie finished #3 in AKC standings. Willie relaxed for most of this
year to mature while training for the Agility ring and be ready for another year ahead.

December 2008...sees Willie win GROUP I - the first GP in many years and only ever the
second dog to do so. Allen is the first owner/handler to do so in GP's, with multi BOB
wins along the way.

2009
2009 Willie got a Group 4 in his first show in 2009. (Willie will also make his debut in the agility ring this year.) Willies achievements keep on coming but with limited
page space we will abbreviate any further accomplishments to the largest
wins.
August 2009...sees Willie win GROUP I and BEST IN SHOW!!!!

Willie retired form the show ring and continued his career in the agility and obedience rings. He passed at 11 yrs old.